Last year (March 25, 2015) I shared the following devotion. It doesn’t seem to me much has changed.  Whether its worth saying again or not, its still what I think. Dan

And so it begins. Someone announces their candidacy for office and immediately promises, claims, and counterclaims begin to fill the airwaves. We are overwhelmed with news reports, commentaries, blogs, Facebook posts, and twitter tweets.

Information overload. Who do you believe? What statements can you verify? Whose voice do you trust? And so it begins. Or does it never seem to really end?

I think its terribly frustrating to feel caught between either believing everything that comes down the pike or being completely cynical and suspicious about everyone and everything we hear. Is our only choice naivete or cynicism?

But we aren’t sheep. How do we pick out the voice of the Good Shepherd amid all of the dangerous and deceptive voices we hear around us today? How do you know what or who is truthful and who isn’t? Who do you believe when they start off by saying, “Jesus says…..”.

One of the things Lent should help us consider, especially as we move into the remembrance of Holy Week’s events, is how do we clearly hear Jesus’ voice today?

How do we discern Jesus’ words to us?

Based on today’s passages from Romans and John, here are some guides.

Paul said, “So faith comes from what is heard, and what is heard comes through the word of Christ.” Christ does speak to us today – with words and gifts of peace, sacrifice, welcome, and the promise of unity.

Prayer: Lord, speak to me that I may speak in living echoes of your tone, as you have sought, so let me seek you erring children, lost and lone. 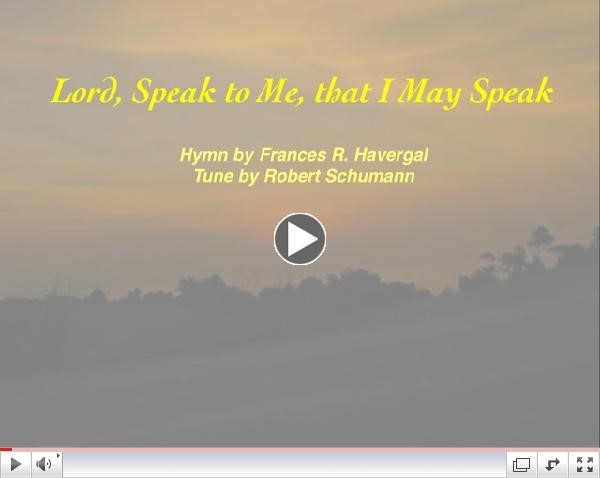 Lord, Speak to Me, that I May Speak