What became of Lazarus?

There are lots of people in the Bible whose lives are touched by Jesus that we never hear about again. The little boy who gave his bread and fish to Jesus to feed the multitude. The woman who reached out and touched the hem of Jesus’ garment.

Wouldn’t it be fascinating, maybe also deeply enlightening, to learn about their lives after they met Jesus. How were they changed? What did they go on to do? What did they think about Jesus years later?

Imagine what became of Lazarus; the man Jesus raised from the dead. When we hear contemporary stories of “near death” experiences the person involved usually describes being positively transformed in some way. They have a new perspective on life. They live with new conviction and certainty.

I wonder how life went for Lazarus after Jesus raised him from the dead. “Lazarus come out!” Jesus yelled. John writes, “The dead man came out”.  Why didn’t he write Lazarus came out? Is Lazarus always going to be known from this point forward as the man who was dead?

The dead man was in the tomb for four days when he stumbled out to the sound of Jesus’ voice. He was still tangled up in his burial cloths. “Unbind him and let him go” Jesus ordered. 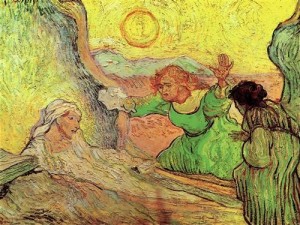 I wonder if it was all blurry for Lazarus; waking up from the dead after four days. I wonder if it was hard to see, hard to hear, hard to know what in the world was going on. Sort of like being suddenly startled awake in the middle of the night.

In the days ahead, there must have been a lot people debriefing Lazarus about what had happened – even while events continued to unravel around them. As a result of Jesus raising Lazarus from the dead, on the one hand, Caiaphas, the high priest, and other Jewish leaders started to make plans to put Jesus to death. On the other hand, many of the Jews were excited about Jesus the miracle worker. Can he be the messiah?

But it also made Lazarus a bit of a celebrity. It thrust him into the limelight and not in such a positive way. The Jewish leaders decided that Lazarus was as much of a danger as Jesus, so they made plans to kill him too.

It all leads into the turmoil of the events of Holy week. Another death. Another body wrapped in burial cloths. Another tomb sealed with a stone.

What if Lazarus struggled with the thought, is this because of me? Would Jesus have lived if he hadn’t raised me from the dead?

What do you think Lazarus thought when he heard the rumors, the news, that Jesus’ tomb was empty. And this time there wasn’t a body to be unbound? Do you think he thought, I was dead once. Is Jesus like me now?

I read a few years ago about a man who had been mugged, robbed, and stabbed in the throat. He almost lost his life. An ⅛ of an inch in the other direction and the knife would have severed an artery. He said the intensity of that near death experience lasted for about a year. For about a year, everything in life seemed different – brighter, clearer, more alive. Then after about a year, life returned to normal (whatever normal is).

I wonder what became of Lazarus. What was life like for him? Was it different than ours? Or are we always being unbound, and let go, strip by strip, from burial cloths to new life, as we hear Jesus say over and over again, “Come out.”

Prayer: “Lord, as I prepare to remember the last week of your earthly life, help me to think not only of the past, but of the present, and where your life touches mine today.”